MIT Puts Pedestrians at the Center of Urban Design

MIT Media Lab’s “Placelet” project will measure the quality of a space by tracking how people move through it.

Creating a lively public space isn’t as easy as building it and waiting for the crowds to come. There’s a lot that city planners have to consider: How much space is available? What’s the target demographic? How can a public space be made energy efficient?

A group of researchers at MIT thinks that there’s an important piece of the puzzle that’s too often overlooked: the human experience. Studying how people interact with cars, buildings, and sidewalks within an urban space says a lot about its quality, says Elizabeth Christoforetti, an urban and architectural designer at MIT Media Lab.

With a $35,000 grant from the Knight Prototype Fund, she and her team are working on a project called Placelet, which will track how pedestrians move through a particular space. They’re developing a network of sensors that will track the scale and speed of pedestrians, as well as vehicles, over long periods of time. The sensors, which they are currently testing in downtown Boston, will also track the “sensory experience” by recording the noise level and air quality of that space.

The general idea is that, the more slowly people are moving through a space, the more likely it is that they’re enjoying it. “If you imagine a busy urban square, where there are large groups of people sitting down and chatting, that probably means it's a good social experience,” Christoforetti says. “However, if you have skinny sidewalks, or people are rushing through there because maybe they’re scared about their safety, then that space probably could use some improvement.”

But without concrete data or visualizations, it can be hard for city planners to understand exactly where problems lie. Take, for example, the Essex Street Pedestrian Mall in Salem, Massachusetts, where Christoforetti was a designer for a different project. “Everyone was convinced that the pedestrian mall needed to stay pedestrian, but businesses were struggling, and there were very high rates of vacancy,” she says.

It turned out that the streets there weren’t as safe for pedestrians as the community thought. Service vehicles and trucks were making all kinds of deliveries throughout the day, and the streets lacked cross streets.* “Nobody wanted to walk into the middle of this 900-foot block with no cross streets,”* she says. All Christoforetti had at the time, though, was anecdotal evidence. “If we could’ve illustrated what was happening with data, that there aren’t a lot people but tons of cars during [certain] times, we could’ve made good decisions more quickly.” She could have, for instance, used sensors to test out different street management interventions, like one that prohibits deliveries during lunch hours.

She hopes cities will use the technology from this new project to draw out the subtle problems that cause the inefficient use of public spaces—and to test out different solutions. 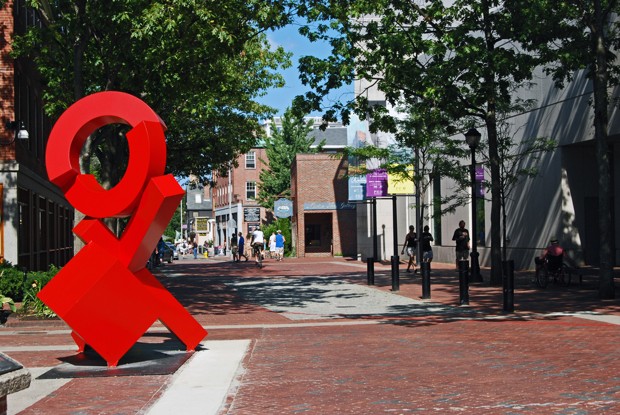 The Essex Pedestrian Mall in Salem, Mass. had plenty of attractions, but view visitors on foot. (Flickr/Harvey Barrison)

Christoforetti explains that the sensors detect people and cars moving as groups, or “blobs,” which will then be turned into interactive maps to help communities visualize the different interactions taking place over time.

“One of the things that cities can fail at is thinking about design [from the perspective of] an airplane or a car, but not from the perspective of a pedestrian,” says Brent Toderian, a city-planning consultant and former chief planner for the city of Vancouver, Canada, who is not involved in the project. “So it’s about empathy and putting yourself as a designer in the place of the people. That sounds obvious, but it’s amazing to me how often cities don’t even have the right information to try to do that.”

“Any kind of information you gather from sensors is interesting, but not the entire truth.”

Yet the idea of studying human behavior in public spaces is an old concept, one pioneered by the late urbanist William Whyte in the 1970s. “He used cameras and placed them at the top of buildings to watch how people use public spaces. It was called the Street Life Project in New York City, and he could speed it up and watch interactions,” Toderian says. “His researchers did a really old-fashioned thing called ‘counting.’”

Whyte and his researchers kept track of how many people moved through a space, how many lingered, and how they adjusted in order to interact with others. Gathering this information was revolutionary at the time, even though they were “just paying attention.”

Even with the promise of MIT’s new technology, Toderian hopes city planners will still make an effort to gather information the old-fashioned way: by going out and observing the foot traffic, studying people’s body language, and talking to pedestrians.

“Any kind of information you gather from sensors is interesting, but not the entire truth,” he says. “It has value, but don’t for a minute think that it finishes your work for you.”