In December, Washington, D.C., became the latest American city to release a Vision Zero policy aimed at eliminating traffic fatalities. It’s an impressive action plan that says the right things about designing safer streets, implementing new regulations, and codifying laws that prioritize “the most vulnerable travelers”—especially pedestrians. The District already does fairly well, with just 26 deaths in 2015, and its goal of zero by 2024 seems totally within reach.

This week, at a conference of transportation professionals, Jonathan M. Rogers of the District DOT, described one of the plan’s most promising elements: the use of data to predict trouble spots. In the past, he explained, officials relied on historical crash statistics to locate hazardous intersections—a reactive approach that essentially waits for bad things to happen. Vision Zero will use a “predictive risk model” that pushes the city to act before it’s too late.

“That would take into account not just that a crash happened here but factors that we have learned contribute to crashes or can predict the likelihood of a crash: things like the number of lanes, the width of lanes, the geometry of the intersection, the design speed, the posted speed limit,” said Rogers. “All those things that we do analyze in a retrospective way right now, but we want to be able to prioritize locations using those attributes.”

A predictive crash model would be a tremendous step forward for DDOT and could indeed save lives. But data is agnostic, and the type of information D.C. hopes to harness for Vision Zero will only yield benefits if a pedestrian-first mindset is already in place. And in walking around the convention center area during the conference, it became clear that the city still has some prep work to do in terms of establishing a street culture that truly prioritizes vulnerable users—long before the analytics take over. 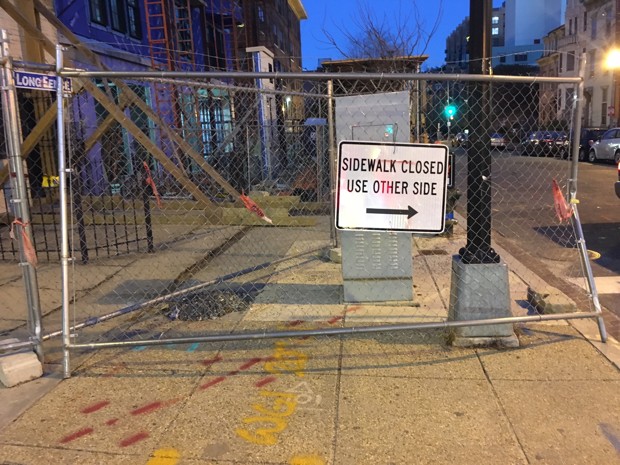 The sign asks pedestrians to use the sidewalk across the street. That seems innocuous enough at a glance, but in practice what it’s doing is either pushing people into the middle of the street, where they’ll be in closer contact with moving traffic, or generally disrupting their route and making it less pleasant to walk. It chooses this approach rather than establishing a temporary walkway on the same side of the street—even if that means inconveniencing cars by reducing lane width or (gasp!) removing curb parking on the opposite side.

A policy that truly prioritized vulnerable street users would do something along the lines of what Seattle recently did—making sidewalk closures an absolute “last resort.”

Exhibit B—this sign at 14th & N telling pedestrians they “must” push a call button to get a walk signal: 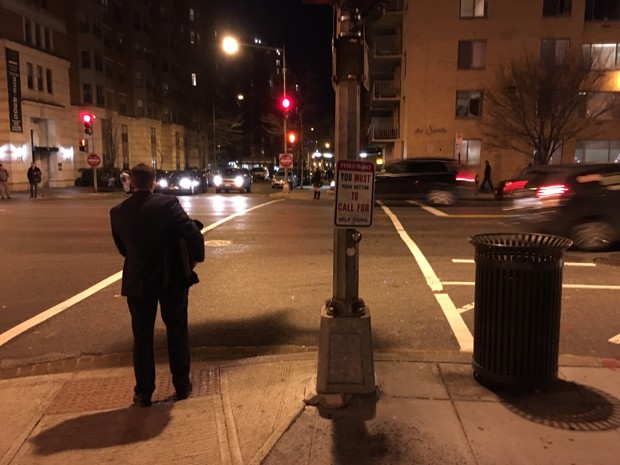 While it’s comforting for pedestrians to know that a walk button actually does something, it’s outrageous to require that action in an area with a high volume of walkers. If you just step to the curb, as the gentleman above (and yours truly) did, you might easily wait through an entire light cycle before realizing that you have to physically do something to gain crossing permission. A worse outcome from a safety perspective—though understandable from a behavioral one—would find people walking against the light or crossing mid-block.

The only reason to require a walk button is to extend the light cycle for cars when it’s not pressed; in other words, pedestrians at this sidewalk suffer in the name of speedier traffic. Once again, here’s a policy that prioritizes drivers over those vulnerable street users that D.C. Vision Zero hopes to protect.

These two examples may well be anomalies, and who knows, maybe they’re first on D.C.’s post-Vision Zero to-do list. More likely they’re a sign that even progressive cities have plenty of low-hanging fruit to pluck when it comes to pedestrian safety. Predictive risk models may indeed help urban areas move toward zero traffic deaths, but a lot of the problems can be solved by doing something no computer can: just walking around.